Welcome to the Home of

Everything you wanted to know about the Texas Ranger, Wade Justus stories and the author. Join our mailing list to get notified when new books in the series are released. View our gallery for the on-site locations visited by the author that inspired the scenes in the novels.

Use the links below to order Absolute Justus and Justus for All, the first two books in the Wade Justus series by Ron Martinelli.

Book 1 in the series

Retired and revered Texas Ranger, Wade Justus, thinks that he has finally moved on from a respected career in active law enforcement. He has re-engaged life by returning to ranching and working with his beloved bucking bulls in the Texas Hill Country. But his lingering guilt from the tragic events of an officer-involved-shooting continues to haunt him in the middle of his nights.

Wade’s son, Hunter, who is a Special Agent with Tennessee Bureau of Investigations, inadvertently changes Wade’s plans for a peaceful transition back into civilian life when a serial killer turns the city of Nashville upside down. When Wade comes to the aid of Hunter, the paradigm rapidly changes and Wade enters the fray in a quest for justice – Absolute Justus.

Order book 1 in the series today. 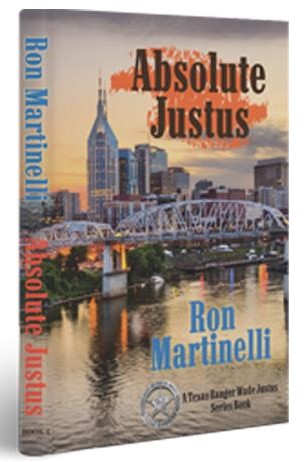 Book 1 in the Wade Justus series.

Shipping in the U. S. only. Please contact us for international shipping fees.

Order book 2 in the series today. 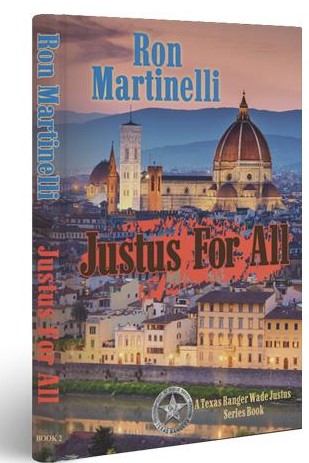 Justus for All by Ron Martinelli

Book 2 in the Wade Justus series

Shipping in the U. S. only. Please contact us for international shipping fees.

Book 2 in the series

Retired Texas Ranger Wade Justus has been enjoying life on his bucking bull ranch in the Texas Hill Country, but his son, Special Agent Hunter Justus of the Tennessee Bureau of Investigation, has a special woman in his life whom he really wants his Dad to meet. In a change for both men, Wade and Hunter travel to Florence, Italy on vacation to meet Carabinieri Investigatore, Lida Aldobrandini. Little to Wade and Hunter realize that their Italian holiday will soon lead them into the dark and deadly world of international terrorism.

Join Wade and Hunter Justus on this perilous journey through the streets of Florence and the countryside of Tuscany, Italy in the next book in the Texas Ranger Wade Justus series – Justus for All.

Get the latest updates and content delivered directly to your inbox.